Reta Wars is a simulation game running on the Binance Smart Chain that adds strategic elements to NFT-DeFi. In particular, it aims for a full-fledged Game-Fi that includes all game elements such as role-play, growth, competition, and chance.

Hire Heroes, and grow your territory!
Think Strategically, and unite with your faction!
Lead Faction to Victory, and get greater rewards!

Contents hide
Reta Wars is a simulation game running on the Binance Smart Chain that adds strategic elements to NFT-DeFi. In particular, it aims for a full-fledged Game-Fi that includes all game elements such as role-play, growth, competition, and chance.
Reta War – The daily warfare between Nate and Gaia
Heroes
Territory
Related Posts:

The ‘Reta Wars’ is a simulation game that adds strategic elements to DeFi. In particular, it aims for a full-fledged Game-Fi that includes all game elements such as role play, growth, competition, and chance. It does not require busy and fast hand movements like an action game, but it requires thought and wise decisions to effectively control the heroes. The player can establish a long-term strategy, place heroes in the right place, and get rewards based on their performance as a profit.

Players can scrutinize the skills and stats of their hired NFT Heroes and place them in facilities installed on their estates. Heroes produce resources or engage in battles where they are deployed according to their abilities and skills.

Players can level up their heroes or equip them with weapons to increase their abilities. Heroes with higher levels will reward you with higher productivity and combat power, and weapons will greatly enhance the hero’s specific skills. Players can get better opportunities to get better yields by improving their heroes in this way.

These growth factors require players to scrutinize and compare, while at the same time ask them to reinvest some of the profits from the game to drive better returns.

In Reta Wars, players deploy their heroes in equally distributed territories to gather resources from lumber mills, mines and farms. Territories can have additional utilities and building to train heroes and serve their faction.

On a daily basis, two factions representing Gods fight for becoming the “God of Gods”. Players must choose which faction to support, and provide support in terms of resources, combat power and intelligence to their faction. The winning faction receives resources and Rose Gold Tokens.

Reta War – The daily warfare between Nate and Gaia 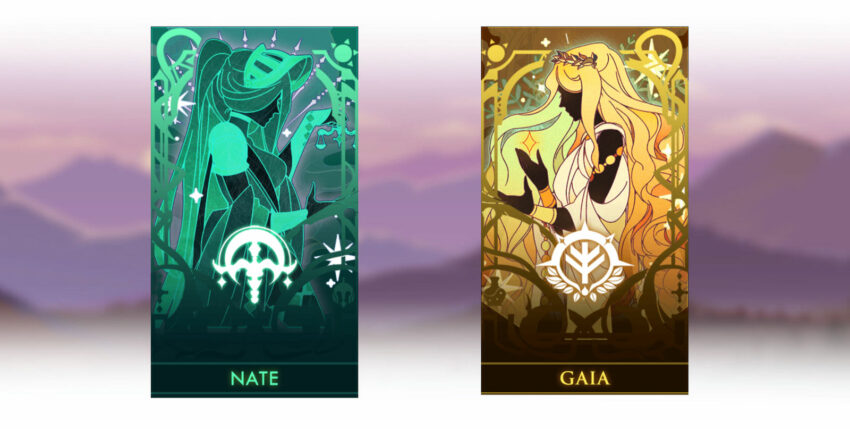 The Reta War is a large-scale war simulation between Gaia and Nate (the two countries) Gods wanting to compete to become the God of the Gods. Reta Wars are the biggest play-to-earn content of the game, and, as a result of the battle, players will earn Gold Rose tokens, resources, and access to more plots of land.

To create a profile, players must choose one of the two nations on the screen. You can review various details, such as the average winning ratio and recent outcomes, before choosing a faction. Imgine two DAOs fighting for supremacy, that is what Reta Wars is. Although not impossible, it is difficult to change your mind once you’ve made a decision, so proceed with caution.

In order to ‘win’ or occasionally ‘lose’ a battle, players must support the faction supplying resources gathered in their territory. This includes resources obtained from mines, lumber mills, and farms. You may examine the resources you’ve contributed for the day on the faction screen, as well as the overall number of supplies gathered in your faction thus far.

Once the resources are gathered, all players in the faction will vote on the battle forming setup: deploy strong back, deploy strong front, deploy strong middle. The enemy has no way of knowing which formation has been chosen. 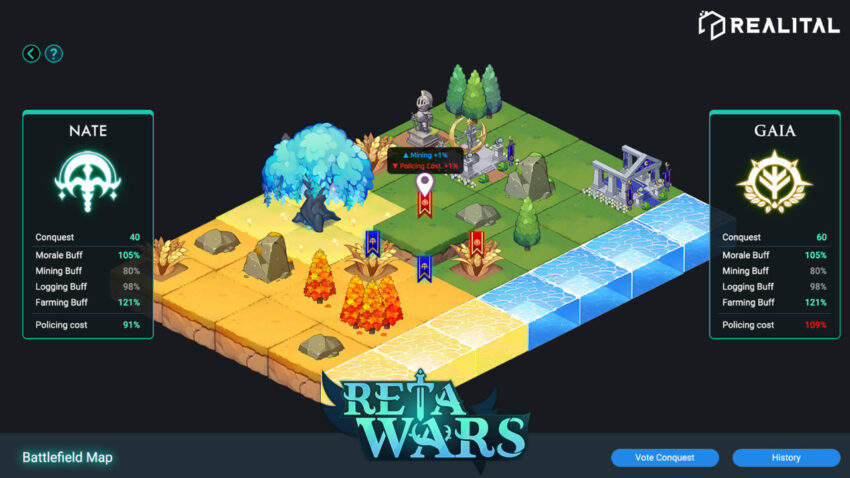 Depending on the outcome of the daily Reta War, you can begin the invasion and occupation. The victorious faction can take up two squares of land, while the losing faction can only take up one square.

Occupying resource lands brings an advantage to PTE revenue. For example, all players belonging to the faction occupying the wood tile will increase their wood production. Strongholds, such as temples and shrines offer various advantages to factions. Land occupation is decided by a voting system internal to the winning faction.

As of now, heroes acquired through presale get 2% of the token allocation if staked. However, they will be fundamental in each part of the gameplay.

Each hero will have 5 Stats and 5 Skills, all randomly determined when they are first created, and their final ability is determined by their rarity. No hero is designed to excel in every way. 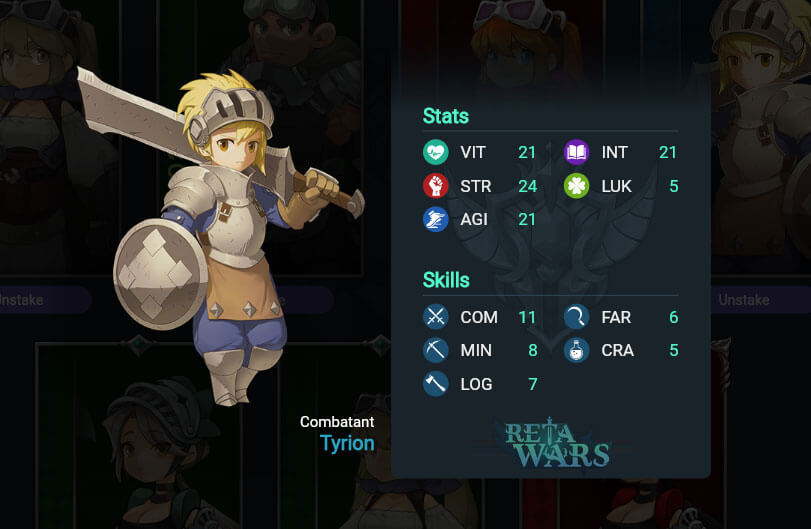 When a hero is first created, their rarity is randomly determined. It is divided into five levels, from Common to Legendary. The higher the rarity, the greater the sum of Stats and Skills. 54% of heroes are common, 30% uncommon, 15% rare, 0.99% epic, 0.01% legendary.

Stats are the basic abilities of a hero. Here’s the one we know will be present in-game:

A hero’s skill is an indication that decides which field a hero can have the biggest influence in. The following is a list of the skills that will be offered:

You can place your Heroes anywhere on your territory, but the best results are obtained when you understand and utilise your Hero’s ability to profit more from your terrains and contribute to the Reta War. Stats and skills determine how useful the hero will be for your territory and for the War.

When starting a new game, all players will receive a Territory. All land is distributed equally, and there’s no land play on the horizon.

The territory is a space equipped with the core facilities of the game such as production facilities and barracks. As a commander, it’s your job to nurture it and make it profitable.

Resources gathered in your territory can be sold for money or contributed to the Reta War. Keep in mind you could get more resources than the ones you contributed if the faction you belong to wins the daily competition.

Each territory can produce wood, ore, and food, respectively from the lumber mill, mine, and farm. All of them are necessary to upgrade buildings and build new facilities.

Additionally, territories can have buildings where heroes can train to perform specific tasks in the Reta War. For example, they can increase the Morale of other heroes by training in the barracks, and keep military secrets if deployed in secret bases.

Commanders can upgrade their territory and buildings to store more resources, hire more heroes, and build a more solid infrastructure.

Everything you contribute to your faction will determine the size of the faction’s army. Winning the war is your main goal as a commander.